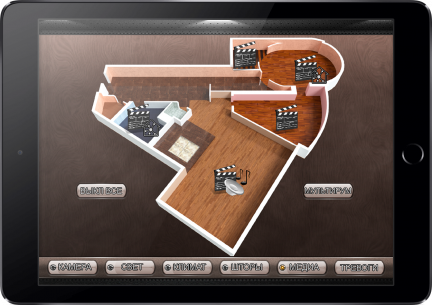 Tasks set by the client in the project
An automation system on AMX and i2control was installed 15 years ago. After several power shortages and intrusions by inexperienced people part of automation equipment went out of order. The task was to restore everything in the apartment without causing discomfort to the owners. So everything had to be found, installed and set when there was access to apartment.

Why did you decide to use iRidium? How did it improve your project?
I3pro is used to control the system from mobile devices and touch panels. Capability to integrate different protocols and flexible control of the system When the visualization for this project was ready, the customer found it inconvenient. It had happened on other projects before. So even when the interface is developed following your customers’ wishes, after the interface is presented there is a chance that you’ll have to change all visualization iRidium here provides a unique capability to make an interface to suit any customer.
iRidium server on a PC is used to integrate Crestron processor (where logic to control multimedia is realized) with KNX via a native driver.

Difficulties you encountered while working on the project.
The main problem was that the customer insisted on keeping equipment that was installed 15 years ago, including ELO built-in touch screens. But it later turned out that ELO monitors support only drivers from Window 7 (not later). And it took a lot of time to change the control interface after the customer found the initial visualization inconvenient.