Smart homes > Custom interface for an apartment in Saint Petersburg 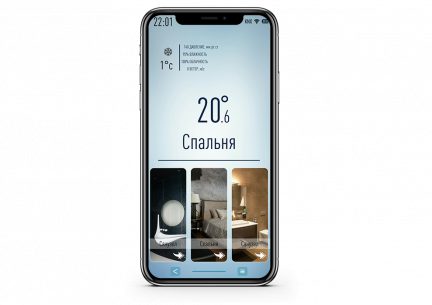 Custom interface for an apartment in Saint Petersburg (Elspace)

Tasks set by the client in the project
The task of the project is to realize convenient and reliable control of the following engineering systems from one control panel:
To automate the work of all engineering and multimedia systems of the apartment, as well as security and access control systems and to realize control from a smartphone.

Why did you decide to use iRidium? How did it improve your project?
We have chosen iRidium to implement our ideas to create a convenient control interface.
iRidium server UMC allowed us to solve the following tasks: integration of third-party systems (multimedia, home theater, security system) in KNX, creating of scenes, voice control.
Drivers developed by Elspace: AJAX, Busch iNet radio, Yamaha WXA, OpenWeather, JVC.
Drivers from iRidium: Denon, Yandex.Alice.