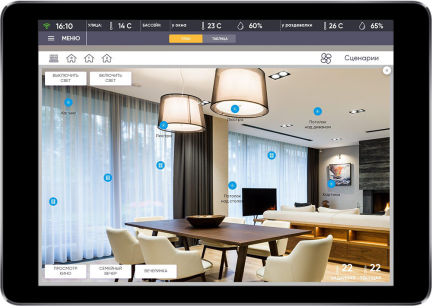 Tasks set by the client in the project
The main task was to realize simple control of comfort systems and single security control of the house and the surrounding territory.

Project description
Complete automation of a 650-sq.meter house and the surrounding territory.
Smart home is realized on the basis of KNX protocol, panels by Berker are used to control.The project features control of lights, diode-tape (including scenes), blinds, zone climate control (heating, conditioning), ventilation, fire and security alarms, access control, IP-intercom, video surveillance, leak control. The system can be monitored from a tablet and a smart phone. Remote monitoring is available.
The project also features complicated multi-level security system of the house and the territory. It is included in the upper-level automation system and used in scenes. Complicated logics of climate control is realized that allows to control temperature and humidity by zones in rooms.