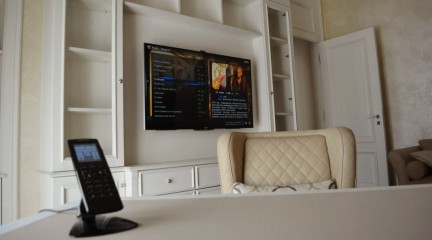 Tasks set by the client in the project
All the work on the automation of the smart apartment had to be done in 3 months.

The project features:
Lighting:
1. All light in the apartment is automated.
2. Dimming is also available.
3. Smooth switching on/off the light.
4. Light scenes were programmed.
5. Scenes “light +blinds” were made. Combined scenes, such as “light+blinds+music+…” can be created.
6. All types of lamps can be dimmed but for energy-saving ones.
7. In halls and corridors light is switched on by activation of motion sensors. “Night” lighting mode is programmed not to blind people at night.
8. Lighting sensors are installed and used in lighting scenes. The sensors determine the time of day and depending on it activate a certain scene.
9. Light is controlled from wall-mounted button panels, touch panels, remote controls, iPad.

Blinds:
1. All window blinds are automated.
2. Types of blinds: sliding and roller blinds.
3. Scenes “blinds + light” were made.
4. Blinds can also be activated by lighting sensors.

Scenes:
Dynamic scenes are created, i.e. the customer himself can create his own control scenes, decide which light will go on, which blinds will open,. Every room has local scenes “Switch All Off” in this room.

Power load:
1. Power can be cut off to the following devices: an iron, a washing machine, a dish-washer.
2. Fire-place control: switch on/off, flame control.

Climate:
1. All climate systems (conditioning, ventilating, heating and warm floors) are automated.
2. Smart home provides synchronized work of all climate systems.
3. Temperature in every room can be controlled independently from other rooms.
4. Frost protection (when the temperature is < 14.5 heaters switch on, when the temperature > 15.5 they switch off)
5. The system itself decides how intensively to cool or to heat a room, and what resources to use for it. All a user has to do is to set the required temperature for each room.
6. Modes for warm floors: «regular» (simple adjustment ), «daily» (adjustment at a definite time of day), «weekly» (adjustment at a definite time of the week).
7. Climate is controlled from wall-mounted touch panels, remote controls and, iPad.

Multiroom (audio and video).
1. Ceiling acoustic loudspeakers are installed in 7 rooms.
2. Home cinema in the guest-room.
3. Sound sources for the multiroom system – Fm-radio, Internet-radio, media player, satellite receiver, Apple TV and airPort. All equipment is installed in the server stand.
4. Different media content can be listened to and watched in different rooms independently of one another.
5. In rooms with TV-sets sound can be broadcast via the ceiling acoustic systems.
6. Full HD on every TV-set both for films broadcast from the media-player and for satellite television.
7. Sound is controlled from wall-mounted touch panels, remote controls and iPad.
8. Simple, intuitive, comprehensive interface is designed.
9. Special features:
“Busy source” function is displayed if the source is busy in another room, and in which room).
Control of all multimedia devices and TV-sets from one iPad. Control of sound adjustment for all rooms (high, low frequencies, balance) channel sound control for the sitting-room. A special algorithm of switching between sources provides minimal time of switching from one source of content to another

Home cinema:
1. Home cinema with 5.1 sound is made in the sitting-room.
2. Home cinema is controlled from a remote control and from iPad.
3. Home cinema equipment but for local Blu-Ray player and Sony Playstation is placed in the server stand.

Network. Wi-Fi:
1. The apartment is covered by a Wi-Fi net with a stable signal of 802.11n standard.
2. All wired and wireless clients have high-speed access to the Internet.
3. Seamless Wi-Fi roaming.
4. Internal net - 1Gb.
5. NAS stores films, music, photos, family archives , video from surveillance cameras.
6. Remote access to the storage.

Video surveillance:
1. 5 IP-cameras.
2. . Video is stored in NAS.
3. Video from the cameras can be watched from devices in the local network (including iPad/iPhone) and remotely.

Specially designed projects:
1. Project of power system.
2. Project of low-current network and an automation project.
3. The project has can be upgraded in the future. For this purpose structured cabling systems is created.

Difficulties you faced while working on the project
Temperature sensor in the kitchen displayed temperature higher than required. ARCAM AV950 didn’t always receive a command, to fix it an algorithm was realized that can determine that a command was not received and send a command one more time. LED-lamps bought by the customer did not dim well, so we changed the dimming modes in Crestron modules.